I’ve been sitting on this story for several years now. After some gentle prodding from my husband, and just feeling like it’s the right time, I’m sharing it here. Some of my most profound interactions in life have been with people that would be labeled “poor” or “marginalized.”  Over the last few years we have intentionally put ourselves in environments and situations where we are able to get out of our safe “bubble” and let love in. This is one of those stories.

“Would you like to buy some chickens? I have white chickens, chinese chickens, black chickens…”

So began my friendship with the homeless man named Al, with birds for friends that he jokingly tried to convince my boys and I were his pets. He lived by an abandoned restaurant with a shopping cart packed full to the brim with his only belongings and a sitting chair close beside. He always had someone less fortunate than him nearby who was looking for help – and to that person, Al was their helper. When at first I was getting to know him he told me where he slept. A little restaurant around the block that the owner let him in every night. It was a great deal really. He spent all day in the shade, and had a safe place to sleep at night. “How do you eat every day?” I asked. Ah, his face lit up. “God is good. I am never hungry. I have everything I need. I am happy.” 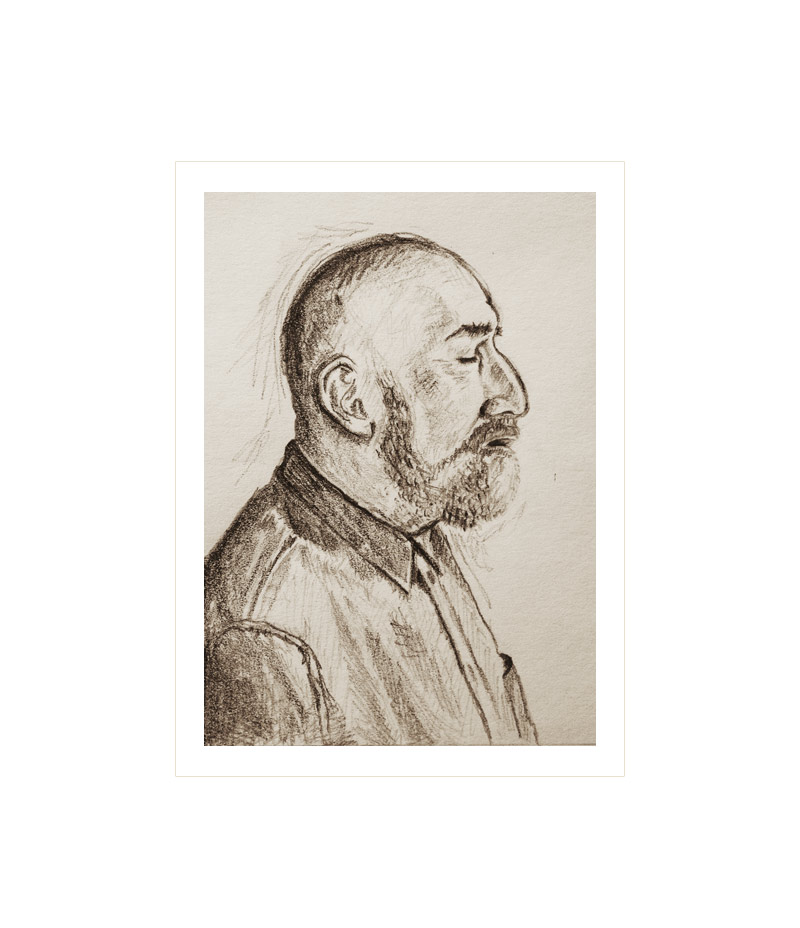 About the drawing: I have tried my very best several times to render Al’s portrait by memory – unsuccessfully. The above sketch is actually based off of a photograph of astrophysicist, Kip Thorne, who bears his likeness almost to a “T.”

During our frequent visits he gave me many words of wisdom which I felt proud to have interpreted despite his thick Hispanic accent. What intrigued me the most was his faith in God. He used his time sitting all day to pray. He was not lost in the labyrinth of his own mind like a lot of people that live on the streets. Sitting alone one day, he started to laugh uncontrollably – and he felt worried that he might be like one of those people he sees pass every day and his heart breaks for. Then he did a self-evaluation and determined, “Nope, I’m just very happy.”

One day he called me “Mija” (pronounced, me-ha) which means “daughter” in Spanish. He told me that he is 78 and has a biological daughter of his own, in Texas. He likes living on the streets, well, as far as the freedom goes. But he is old, and his body is deteriorating. “I’m no sissy” he said. But the pain. The pain has been enough to make him cry out in agony. I wish I could take it away. I wish I could give him a nice soft bed to sleep in. But something makes me stop. It’s the occasional inappropriate comment. The look up and down my body and the way his mouth fills with saliva like I’m a piece of meat. I’m confused. It’s like he’s a different person when he acts this way. I know that it is just his old habits, something he used to do so frequently, it’s like second nature. A nature he’s repeatedly told me that God is still working on. “We can only pray and ask God to make us better. And he will.” In those uncomfortable moments, I remind him – I am “mija” – daughter. I say, “I love and care for you like…”

…“like a daughter,” he finishes. The animal look escapes his eyes and his face returns with that familiar warmth. My eyes fill with tears. He sees me, Evie – daughter – and that is enough for that moment.

“The way I think about you is not right. But my heart for you is good.” He says with a regretful sadness. I get it. I often feel like I’m teetering on the edge of animal and angel. That there are parts of me that are so filled with light, and then there are dark corners where it seems that not even a tiny pinpoint of sun can get through. My dark room isn’t lust, like Al’s, but it’s a room called anger. And another one that’s called resentment. I walk away from our final encounter and I can feel the Spirit teaching me something else through my friendship with Al. If I don’t let God in those dark rooms, if I don’t get a sledgehammer and start busting out walls to let the light of God in, it will become second nature. I will walk in that room and not even see the difference.

We were moving away. Before we left I gave Al the news and his words to me were, “My heart is breaking.” I assured him that I have friends here that if he needs anything, to call me and I will send help. “I don’t want your friends, I want you, mija.”

“I see myself in your eyes for the very last time.” He says wistfully. Oh how that struck me as so  profound right then. Indeed, we do see our reflection in others. Sometimes, we are repulsed by what we see. Sometimes, we are filled with a sense of recognition. In his eyes, I see myself. I see the way I am, and the way I want to be. And oh, the reminder that we are never a finished work – even at age 78.

We said our goodbyes and tearfully parted ways. I don’t know if will see Al again in this life or not. I will treasure the time I knew him, and what he taught me.

That I am mija. Daughter. That identity can change everything. That light can pierce darkness and create life-giving beauty. Thank you, Al. I hope I see you on the other side.

3 thoughts on “What a Homeless Man Taught Me About Identity”