Recently my 1.5 year old lost his pacifier – and I ran out of backups. My first son never really took one, so it was foreign to me to have a babe that desperately needed it so often. So I had the choice to force weaning him from it or get a new one. I chose the first option. Poor guy, he was having a pretty rough time. 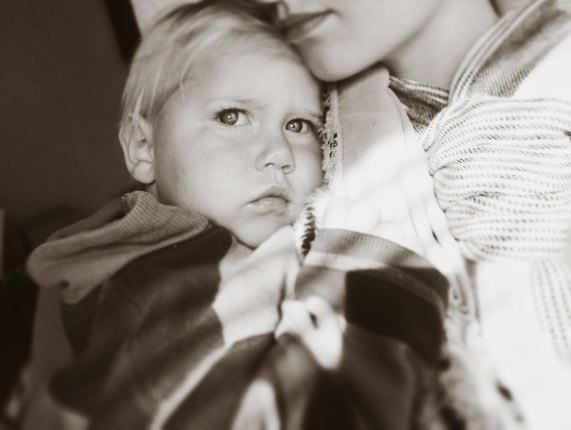 Just a few months ago I successfully weaned him from nursing, after about two months of hard nights and days trying to get him unhooked. I started to think about why it was so traumatic for him. And it’s simple really, I’m removing something from his life that comforts him.

To which I thought, “Hmm, that’s familiar.”

God has been leading us on a journey that has resulted in comforts being removed. In the last 3 years the comforts of money, safety, friends, family, and things that were familiar have been slowly stripped away more and more. At first it was very uncomfortable. I might have even thrown a few tantrums. But by now, I’ve not only gotten used to it, I welcome it. For it’s in discomfort that often you have the chance to grow the most. To trust. To actually know who – or what – you really put your trust in.

Ultimately God has done this, I believe, to force us to grow up a little. Kind of what my little babe has to go through. But I think the big reason why is to learn:

He is sufficient. He is enough.

He is our comfort. Not our house. Not our money. Not our marriage or relationships. It’s Him. So in other words, if all those other things in life were removed (which, let’s be honest could be removed at any time), the ideal response would not be a traumatic one, but a peaceful one.  One that’s totally and completely comforted by the sufficiency of Christ.

As for my baby, well…I broke and got him a new pacifier. I know – tsk tsk! Let’s just say I’m saving that battle for the road ahead. But he’ll learn soon enough that the little bit of temporary comfort that a piece of plastic and rubber can give him will soon hopefully be replaced by something far more valuable and eternal – the comfort of the true and living God.

11 thoughts on “A Stripping of Comforts”